Eden - shelter from the storm

Many of you will be aware that there has been some pretty nasty weather in NSW in the last few days (SA and VIC also copped it pretty hard too).  We are happy to report that we have been safely tucked up in Eden, southern NSW since Tuesday, sheltering from the wild weather in Two Fold Bay - well known to sailors heading south to Bass Strait and Tasmania.

We left Jervis Bay late last Monday morning for the 130 odd nautical mile voyage to Eden.  We enjoyed a good reach with jib and main in moderate easterly winds for about 6 or 7 hours, averaging around 8 knots.  As the afternoon faded the wind freshened and went north so we pulled the main down and went to our night sailing rig of poled out jib.

A sudden thuddery, juddery jolt at about 5pm startled us (understatement!) and looking behind we realised we had run over a creature - possibly a small whale (minke?) or a large dolphin. We felt dreadful as we looked behind and caught brief glimpses of it struggling in the water,  and hoped the poor thing would recover from its ramming. Fortunately for us no damage to our boat. The depth gauge had gone from 100+ metres to 3.3 metres as we passed over it.

We sailed through the night with Roz having her first night sail experience, taking her watch and doing a magnificent job steering down the waves in the dark.  The seas were short, steep and awkward, making for a rather uncomfortable rolly-polly motion as we ran downwind. Jenni was somewhat out of action for the first time with the dreaded "mal de mer" and consequently bunked off for most of the trip.

Dawn on Tuesday saw as arrive in beautiful  Eden - made famous in more recent history as a refuge and rescue point for Sydney Hobart yachts needing to escape the race before hitting Bass Strait.

Eden has a fantastic harbour which although quite open to the east offers sheltered bays on both sides.  The town itself is small and friendly (about the size of Denmark WA) and well used to catering for seafaring folk.  It has a history in whaling and fishing and an unusual story of Killer Whales working with the early whalers by rounding up the poor whales and trapping them in the bay for the humans to kill.  The Orcas reward was to feast on the whale's tongue and mouth - apparently the best bits if you are an Orca, and then they would leave the rest for the humans.  A curious and gruesome story told in the local museum.
Watching the weather forecasts, we prepared ourselves for the gale and storms due on Friday and the weekend.  Thursday was a prelude with thunderous skies developing in the afternoon and a short, sharp hail storm just to put us on our toes.  Fortunately we were prepared, back on-board after a day in town and firmly secured to a new courtesy mooring sheltered from the west. We slept soundly Thursday night. 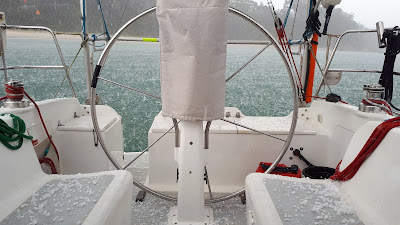 Friday the wind came in fiercely as forecast.  We had an exciting dinghy ride to shore to go to town  again and meet new friends Deb and Brian, local sailors who have been helping us try and source a new solar panel.  Eden town is on top of a hill and the wind was wild up there!  We finished our errands on shore and then planned our strategy for getting back on-board from our little dinghy. Happy to say all three of us made it home to Upstart without mishap.

Friday night got a bit uncomfortable on the mooring with the waves and swell slapping the boat around as the wind had swung more to the south. So yesterday with the strong winds continuing to blow, we moved over to the southern side of the bay for more shelter at Boydtown.

We are now anchored in a beautiful protected spot, enjoying the flatter water here and listening to the wind howl over the top of us.  Right in front of us is a lovely old hotel on the beach - the Seahorse Inn which we are heading to tonight for a slap-up meal and celebration of a certain crew member's birthday.

We will wait here in Eden until things calm down and we get a good window of weather for us to turn around the corner and head west.  Next stop is Wilson's Promontory about 220 miles away.