As many of you may know, we had intended to spend the summer cyclone season based in Carnarvon. However as with all our sailing plans we are in the hands of mother nature and these are really just an ‘idea’. We need to be ready to roll with plan B, C or more.

The high tide we needed to get through the shifting sands that guard the entrance to the lovely Fascine at Carnarvon happens in the middle of the night at this time of the year. That, coupled with the news that the sands seem to be closing the entrance and it is now even more shallow than when we went through a few months earlier meant that our stay in Carnarvon would be short. We wouldn’t be going into the shelter of the Fascine and Yacht Club for summer.

For the first time we took a spot in the Small Boat Harbour outside the Fascine for a couple of days. This is a Department of Transport harbour with no facilities for yachts but it did enable us to take on board some supplies, diesel, water etc. We also collected our Mirror Dinghy sailing rig which was waiting for us at the Yacht Club and we are very pleased with.  It should work well in the new dinghy which we'll build over the summer. It was great to catch up with everyone at the club and sad to say that we wouldn’t be staying this time round after all. We are now heading south with Plan B to be around the Fremantle to Dunsborough area over the summer months.

It was great to set off from Carnavon heading south at dawn on a day promising a brisk south easterly wind. The breeze stayed in at about 20kts all day and we made good time to Broadhurst Bay, a little spot sheltered from the south on the west side of the Peron Peninsular in Shark Bay. Our mate Pete in Zadena 2 left with us and arrived a few hours later just after the sun had gone down.

As we only intended to stop for a night to have a rest, we set off the next morning for Shelter Bay which is just inside the Dirk Hartog Island channel at Steep Point and is the arrival and departure point for boats coming from or going south from Shark Bay. It was great to be back in the relatively sheltered waters of the bay again and covering familiar ground. The wind was light and variable in direction, we even had the spinnaker up for a while, but in the end we did a couple of hours motoring to finish off the day.

We had been pushing on quite quickly to get to the southern entrance to Shark Bay because there was a good weather window opening up the following day for us to do the 150 mile leg down to the Houtman Abrolhos Islands. As it happened the wind was perfect for us and our wonderful Upstart, a fairly strong westerly wind all day allowing us to make really good time. We had chosen Turtle Bay in East Wallaby island as our destination because it was closest and had a good uncluttered approach and lots of government moorings. A good choice as it turned out because we arrived at 4am in the pitch dark.

It is always lovely to wake up somewhere we haven’t seen yet and this was no exception. A very pretty bay with a perfect sandy beach all to ourselves. It soon became apparent that the air strip we had seen on the chart was very much operational as several small planes flew close over the mast every day bringing a few tourists to our beach. It was a great few days we spent there exploring on the land and doing a 7km walk one day right around the island. This gave us a good opportunity to see where we were in this place of scattered islands, rocks, reefs, coral bommies and wreck sites of ill-fated sailing ships. The most notorious being the Dutch ship Batavia in 1629 with its gruesome tale of mutiny and murder.

West Wallaby Island is right next door and is the site of successful resistance by Weibe Hayes and his soldiers to the attacks of the mutineers from the Batavia. Then further around are Little Pigeon and Pigeon Islands and behind them can be seen Beacon Island, Long Island and Morning Reef where the Batavia struck and sank. 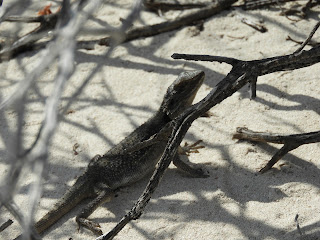 Being the history lovers that we are we had to do a self-guided tour of the places where the Batavia crew lived and died,  so we anchored and moored at all those islands while the wind wasn’t too strong. The islands for the most part are made of coral rubble which washes up with the waves. There is evidence everywhere of human habitation, shelters made from the pieces of plate coral placed around scraped out hollows in the rubble. We had no way of telling whether these were a few years old or a few hundred. There was industrial scale mining of the guano layer on the islands in the 20th century scraping the surface back below the level of the coral rubble so it is unlikely that any of the shelters are very old. The WA Museum has been doing excavation on Beacon Island where there are a lot of graves but we don't know what else they have been finding.

It was a lot colder than we had been used to [in fact we were a bit shocked] so swimming didn’t seem that appealing but Jenni did go in the water once and reported that it was not too cold once she was in.

Our interactions with the wildlife were interesting even though they were not under the water. It is nesting season for many of the sea birds and whenever we went ashore even keeping to the water’s edge as we walked we were still shrieked at by hundreds of birds who did not appreciate our presence. So many beautifully agile terns and larger soaring gulls and sea eagles. 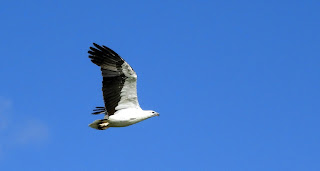 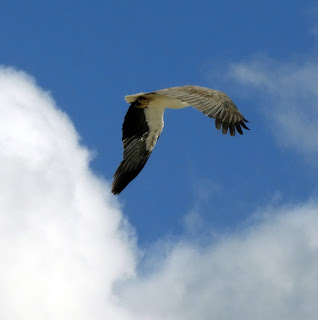 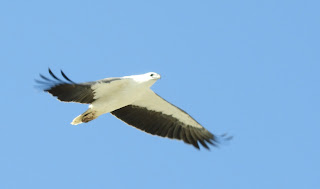 The highlight of the week was an interaction we had with a gorgeous young Australian sea lion. We were doing a circumnavigation of a small island about 100m across, walking along the shoreline, when we noticed the sea lion sitting in the shallows with head and shoulders out of the water watching us intently. As we moved around to the other side of the island where we had left the dinghy, we noticed her following us and as we reached the dinghy she was right there waiting for us. As we began to pull the boat into the water she darted off and we both assumed we had scared her off but no, she did a barrel roll high speed turn and came straight back at us. She was excited that we might play with her and as you can see from the little video Jenni managed to capture, she kept going with her enchanting antics for quite some time.  We drifted out into deeper water and the sea lion seemed to want us to go play in the shallows some more.  Sadly we kept going back to the boat and afterwards we wished we had stayed longer with our beautiful new mate.

After about 10 days or so we had a forecast for very strong southerly winds up to 30 kts so we went to a known anchorage just inside Pigeon Island which turned out to be very sheltered from the swell and waves and had nice deep sand for anchoring. Pigeon island is one of the islands occupied by commercial cray fishing houses and is festooned with jetties and bright lights. There was really nowhere to go within reach of our little dinghy in such strong weather so we settled in and didn’t leave the boat for the next 4 days.

It had been possible for us to get a data phone signal all the time we had been in the islands by hoisting one of the phones up the mast. It was by this means that Chris discovered  he needed to go to Geraldton to do some signing of documents. So we set off as soon as the weather had moderated, bound for the biggest town we had been in since we left Albany in February. Once again it was a great sail and we covered the 50 miles easily in daylight arriving in the marina at Geraldton in the mid-afternoon.  After a week we find ourselves still in town, enjoying the fantastic foreshore, eateries, museum, gallery and other sites whilst we wait for a break in the strong winds to head out to sea again.

Here is the little video of our lively sea lion friend. If you are receiving this blog by email and don't get the video then head to the blogsite: www.jenniandchrissailingadventure.com