Well as it happened, as often happens in fact we had a change of plan as conditions dictated. We did leave our favourite ditch in Western Port, Victoria on Friday evening  14th December to catch the first of the ebb tide back down to Cowes to be ready to leave the following morning.

The forecast was for strong easterly winds easing during the day and we went to bed with the alarm set for an early start. As it happened Chris had a bad night for sleeping and we snoozed on until later in the morning. The breeze was still quite strong but moderating so we set off heading west.

Apollo Bay was not a possibility as the swell was still running at about 2.5 meters and the Harbour Master there advised us against trying to enter the tricky harbour after the strong weather and big seas.  So, we decided to double the length of our trip and head straight for Port Fairy, a total of 157 miles. It was a bit of a strange voyage as the wind died completely by 15:30 hrs and we motored all through the night finally setting sail again for a few hours of sunny gentle windward sailing in the morning to take us into Port Fairy.


Port Fairy is gorgeous. We entered the river through a narrow channel between two walls built in the mid 1800s which took us to a very protected dock right in the middle of town. We enjoyed a couple of days relaxing and resting.  Shopping and eating out seemed to take most of the time. The harbour master was extremely helpful and we felt very well looked after.

We set off again mid-morning last Thursday to do another full day's sailing of 165 miles to Robe, our first stop in South Australia.

We carried the asymmetric kite until dark which was lovely sailing. Straight downwind yet again so we were gybing along trying to not be too rolly. The kite came down for the night and was replaced by the poled-out jib. Slow progress during the night but there were so many cray pots we did not risk running the motor until dawn. As we approached Robe later in the morning the breeze came back enabling us to sail into the bay.

The marina at Robe is through the narrowest of channels between two walls into a tiny round pond where the occasional swell surge makes some alarming whirlpools and swirls in the water. Jenni bravely piloted the boat in and docked her in a brand-new marina berth among the fishing fleet. There was only one other tiny yacht here.

Rather like Port Fairy, Robe is a little old town full of beautifully preserved early buildings. Each one has a little plaque on it with a few words about its history.  The town is a growing summer holiday haven on South Australia’s Limestone Coast and lots of new little shops and cafes have sprung up on the main street since Jenni was last there about 5 years ago.  Fortunately,  the local coffee roasting business is still there doing a thriving trade and after a bit of a trek out to their premises, we are now well stocked up on good coffee.

Robe even boasts a tiny local cinema and we had a big night out there to see Bohemian Rhapsody. A fabulous trip down rock-n-roll memory lane!

The normal population of 1500 in Robe swells to about 10,000 over Christmas so it was time to get out of there and find a quiet spot for our festive season. 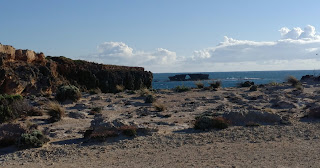 Saturday lunchtime we set sail for Kangaroo Island and we had the most magnificent clear moonlit sail through the night, again accompanied by lots of friendly dolphins who seemed to take time out from their evening feeding to zoom over for a play with us.

Dawn saw us motoring into Antechamber Bay on Kangaroo Is - the first suitable place to anchor up for a few hours sleep. It was a bit rolly and exposed there so after lunch we headed around to the northern side of the island near American River where we are in a large, flat bay with no-one around us enjoying the first warm weather in a few weeks, and the first swim in the ocean since we were in Eden.

As seems typical for South Australia and Adelaide, a heat wave is on its way here so more swimming to come.  We will enjoy a quiet Christmas on the boat here and then head up to Adelaide on Boxing Day for a few days to catch up with cousin Annette and possibly some other Albany sailors who are in Adelaide at this time.

Wishing everyone a very happy and safe Christmas.  Hope it's as relaxing as ours will be!