We love Matthew and Trim! The Flinders Appreciation Society

Happy New Year and may 2019 bring much happiness to you all.

We have had a bit of a break from the blog, so standby for a longer one.  Before we start, just a quick admin note... if you are receiving the blog by email, please be aware that it comes from an email address from the blog site and we do not receive any replies made to it. So please don't send any messages to us at that one, use our personal email addresses; or you can go to the blog website and leave a comment there.

The forecast for Adelaide for the few days after Christmas was for 40 +, so we decided to avoid the heatwave and spend bit more time at Kangaroo Island – it being about 10 degrees cooler there.

After a lovely quiet Christmas Day on anchor at a beach we moved into American River, a very small and sheltered little place inside the river mouth. We then enjoyed a couple of days exploring the tiny town and the tidal shoreline and were surprised at how quiet it was at Kangaroo Island, however we were assured that the bays would fill up with boats by New Year’s Eve for the annual Adelaide yachties cruising ‘race’ and beach party.

American River was named after a bunch of early sealers who set up camp there around 1803.  They then proceeded to build a new boat which they named the Independence and now a crew of enthusiastic locals have taken up the challenge of building a replica.  We had an interesting visit to the boat shed where the volunteers meet each Thursday evening to work on the boat, which they optimistically hope to launch in about two years.

By Friday 28th Dec the weather had cooled down enough for us to head 70 miles north to Adelaide.  We set off in the morning with very light winds and motored until early afternoon when a moderate sea-breeze came in as forecast and we popped the spinnaker.  We sailed along very nicely for several hours, enjoying the breeze and spotting landmarks along the coast as we got closer to Port Adelaide.

As usual, we had checked and double checked several forecasts, however we were about to learn that Adelaide’s sea-breeze can put on a good turn of extra power without permission from the forecasters! At about 5:30 pm the “sea-breeze” rapidly doubled in strength and had us pulling the kite down very smartly.

By this time we were approaching Port Adelaide channel with nasty steep, short waves accompanied the 25-30 knot wind making us roll around quite alarmingly. All this while a cargo ship, pilot boat and two tugs were crowding in on us. It was getting a little uncomfortable and we were relieved to tie up in the very friendly and welcoming Royal South Australian Yacht Squadron.

We stayed at the Squadron for a couple of nights feeling very much at home, chatting to local yachties and catching up with Jenni’s cousin Annette and a few Albany sailing mates. Several national championship regattas going on and a visit to the S.A. Maritime Museum kept us entertained. We also picked up our new parts for the Rutland wind generator which is now whizzing around again and seems to be working well. 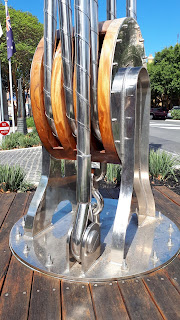 A popular local spot for sailors out of Adelaide is Port Vincent, just 30 miles away on the other side of the gulf, an easy beam reach on most days. After seeing in 2019 from the comfort our bed, we decided to go there for a short visit and spent Tuesday and Wednesday in the strangely desolate marina there. It is one of those real estate opportunities which never really took off before the marina started falling apart.  The exciting thing was that having missed the fireworks in Adelaide on NYE, we got to see them on the evening of New Year’s day at Port Vincent – again from the comfort of our cabin.

We spotted a small and not perfect window of non-contrary winds on Thursday and decided to get out of there and head for Port Lincoln where we knew we could anchor in the lovely national park and do a bit of bush walking. The ‘not perfect’ bit involved a start in hardly any wind from the east and then a change to a strong southerly around midnight which we would not have gone out in were it not for the fact that it was blowing roughly the right way.

So it was that we made a leisurely start motoring out of Port Vincent at about 8am and continued slowly south until 10am when we set the lovely spinnaker until 12.30 when the wind failed and it came down for a lunch break which lasted until 4pm! And so it went on with sails up and down [like the proverbial] and a fickle wind until midnight, when right on time the southerly came in just as we rounded the Althorpe Islands off the southern tip of the Yorke Peninsular.

We had an exciting sail then in the pitch dark of no moon and brilliant stars, in a crazy sea state and with a strong and building southerly wind on our port quarter. Unlit lumps of granite to port and starboard came and went as we sped on northward until just at dawn we caught a glimpse of Thistle Island on the port beam and Dangerous Reef to starboard. Within an hour we were motoring against the strong wind and under grey skies across the harbour to a lovely little anchorage on the west side of Spalding Cove, about 10 miles across the harbour from Port Lincoln. We spent the rest of the day sleeping, reading and resting our weary limbs.

We have both recently read a great book about Matthew Flinders and his dear cat Trim written by sailing writer Rob Mundle. It has been really wonderful sailing along the coast all the way from Brisbane thinking of him and his heroic feats of science, navigation and seamanship in grossly inadequate boats as he charted the coast of Australia.

It would be fair to say the we have both become big Flinders fans indeed and have seen various small tributes to him and Trim along the way. However, we are now in serious Flinders appreciation country down here in Port Lincoln and have just returned from a hike up Stamford Hill to the memorial which was put there in the 1840s as soon as the area was taken over by white people.

Flinders walked up the hill in order to have a good look around for the usual charting/mapping reasons but also to look for any signs of his 7 crew members who has disappeared in the treacherous Thorny Passage a few days before while out in a small boat searching for water. Parts of the boat were eventually found but the crew had perished as the boat was overwhelmed in the strong tidal race in the passage.

Flinders and his crew did a particularly good job of charting the south coast in the days before his ship the Investigator started to really fall apart. It is interesting to think of all the gratitude that would have come from sailors over the past 200 years or so for his efforts and diligence and we count ourselves amongst them. We are excited about seeing a fabulous looking bronze statue in Port Lincoln depicting the young Matthew working on a chart with the loyal Trim sitting at his feet looking out at something more interesting. (You will have to wait for the next blog for a pic!)

We are looking forward to exploring more of this part of the South Australian coast with its myriads of islands, bays and coves.   From what we have seen so far, it offers fantastic cruising grounds with  lots of places to tuck in to and for us, a familiar south coast weather pattern.