After a couple of days enjoying the quiet anchorage at Onslow we were keen to get out to the Montebello Islands.

As it happened a northerly wind was forecast which would not have been safe for us in the bay we were in or good for sailing to the Monte’s so we did our passage plan and hauled the anchor up at 11.30 pm. We had to cover about 75 miles and needed to arrive with good daylight and a rising tide. Passage planning often works backwards from an ideal arrival time and results in a departure time at some unsociable hour. We made very good time with a blustery wind behind us and arrived at the entrance through the reef at 9am the next day.
Following good advice from Billy and Cam in Albany we headed to Claret Bay, a south facing bay at the very southern end of the little island chain. There was nobody else there and we anchored and went to sleep for the afternoon. When we woke up there were three catamarans in the bay and shortly after that two more yachts arrived as well. Turns out everyone had the same idea about sheltering from the north wind which was coming.
It has been a very enjoyable few weeks hanging out with two other yachts from Dunsborough. More socialising than we have done in the past months combined. Both boats had children aboard so it was fun to hang out with them.
Jenni had a great time teaching 7 year old Sylvie to sail and make biscuits.  We all played Finska on the sand, lots of snorkelling on the coral reefs, walking, BBQ fish burgers on the beach, and plenty of good conversations and sharing of ideas and knowledge of the area and beyond.

The Montebellos are a strange and rather eerie place to be.  They were used as a nuclear test site by the British Army in the 1950s and the bombs which were set off have left their marks all over the islands.  Bits of ship, plane, buildings and other debris litter the landscape. It all seems to be left exactly as it was after the blasts. One was inside a ship in the main channel and the other two were up on towers 30m high.
We had no idea how much radiation was around, however the warning signs just say to limit exposure to one hour per day on the land around the test sites.  The islands which the bombs were on are still pretty much void of vegetation compared to the other islands where trees and reasonable biodiversity are in evidence. 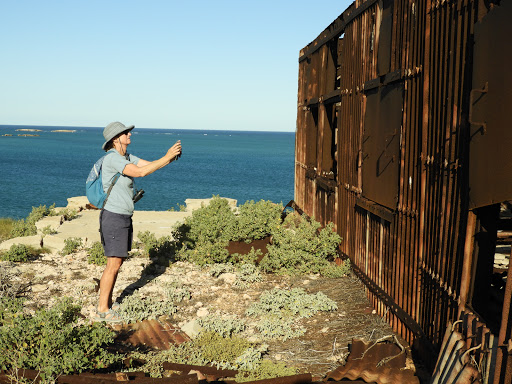 Life below the surface of the water is abundant and varied. We snorkeled on reef which was full of colourful fish, coral, plants and quite a few things which we weren’t sure how to categorise. On one swim we were accompanied by a pair of copulating turtles a few metres away.  It seemed a bit voyeuristic but we felt very blessed to be witnessing such a union.

The young guys on the catamarans were such keen fishers, mostly spear fishing, that we were kept supplied with fish at all times without have to wet a line ourselves. The islands are a paradise if you are into fishing, spear fishing and surfing. In most conditions you can anchor the yacht near the reef where it all happens. We would like to have another visit with a bigger, faster dinghy so that we can explore further afield. Many places particularly in the north are only accessible by dinghy due to very shallow water.

We eventually left the islands in the company of a big yellow cat called Cheetah at about 4am so that we would arrive in Dampier 70 miles to the east in daylight.

During our time at the Monte’s we clocked over 5,000 nautical miles (about 10,000 km) since we bought Upstart in Queensland in 2018.  A milestone worthy of celebration!