Our voyage from the Montebello Islands to Dampier was a bit unusual. We left the Main Beach anchorage on Trimoulle Island nice and early at 4am to catch the best of the day’s wind for the 70 mile sail as it was forecast to die out during the day. As it happened the wind had gone by 7.30 and we did the rest of the trip with the sails up and the motor on very low revs. Extracting every drop of energy we could from the fickle breeze we began to round the southern end of Enderby Island in the Dampier Archipelago in the early afternoon.

This was a gentle introduction to the crazy industrial activity of the Dampier region as bits infrastructure and vessels gradually unfolded before us. We were aware of being in or on the edge of a shipping lane which some service vessels were sharing with us and others came into sight on moorings between the islands as we made our way along. As we came closer to the main action we could see a huge ship heading towards us around a corner. We didn’t know where she was headed but we could see she was empty so presumably going to one of several wharfs. As the gap between us closed she began to turn across our path churning up the silt from the sea bed with her rudder and propellers, the equivalent of wheel spin in a car. This was one of the numerous 300 metre long iron ore ships which are in and out of Dampier all the time. We slowed right down as we waited for this monster to cross in front of us and tie up at the loading dock to our right. Welcome to Dampier!

Upstart found her way into a little backwater which contained a few dozen support vessels on moorings and the wonderful Hampton Harbour Boating and Sailing Club. As we anchored and switched off our own motor we became aware of the rumble of the massive conveyer belt a few hundred metres away on a bridge over a kilometre long which was moving iron ore to the ships. Some sort of deep rumbling is the constant sound track of Dampier and together with a fine layer of iron ore dust you certainly know you are in mining country.

We stayed there for 4 days doing laundry, eating at the club, filling water tanks and doing a full day’s mission into the main town of Karratha 20km away for diesel, gas and provisions. The shopping trip was made possible by the generous provision of a loan car from the club for visiting boats.

Jenni was excited to meet up with Carol an old mate from school she hadn’t seen for many, many years. We had a lovely gourmet dinner at her house and met her partner Pete who also had a yacht in the harbour. A few days later we met them both out at Marnie Bay and enjoyed an evening on the beach playing Finska and drinking champagne.

We then spent the next week exploring the islands in the area. None of them are permanently inhabited but many of have shacks which people use for holidays. Every family seems to have a boat with a large outboard motor and the weekends are busy. We realised what a great thing it was for the people living and working in such a filthy environment to be able to escape to the pristine waters and beaches of these islands. 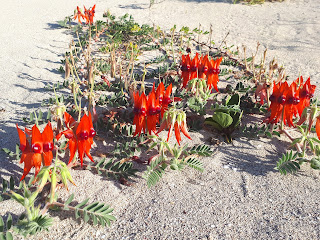 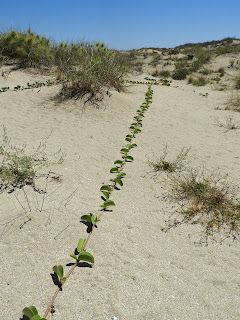 We could have stayed for longer than we did of course and there are a couple of spots we want to check out next time we pass. However there was a nice weather window for us to go south west and we set off for Onslow leaving Rosemary Island at 3am and anchoring in Onslow bay at 8.30pm. The wind was once again very light but we shot through the notorious Mary Ann Passage at speeds up to 9 knots with a big tidal flow under us and made good time covering the 113 miles. We were happy to have seen 4 sea snakes and many energetic whales on the way.
After a couple of nights in dear old sleepy Onslow we set out again for Tantabiddy at the north end of the Ningaloo reef. We had a beautiful day on the water, flat seas, gentle wind and lots of whales.  It seemed to us that  the North West Cape was a big meeting place for the whales on their journeys, there were a lot of them and a lot of breaching and tail slapping.

Our journey north past the Ningaloo Reef had enabled us to see some of the more accessible places along the way but on this trip we wanted to check out some of the more hidden gems. Luckily for us we met up again with Syd on his cat ‘42’. Syd is a Ningaloo old timer and was happy to help us both with marking our charts and allowing us to follow him inside the reef through some of the many completely uncharted areas.

We stopped at Yardie Creek picking our way through a rock strewn area to anchor at a lovely beach about 5 miles south of the creek. Then south to Maud’s Landing for a night then a short hop to Monck Head at Coral Bay a few miles further on. We then followed ‘42’ inside the reef to Warroora about 10 miles south, threading our way through the coral ‘bombies’ and passing some of the many small openings in the reef where waves were just peaking in the area we needed to cross. If the swell had been half a metre bigger it would have been breaking and not passable. Very exciting!

This time rather than anchoring on the beach side we dropped the hook in a sandy patch just inside the reef. This enabled us to do a really lovely drift snorkel along the spectacular reef. We saw giant clams, turtles, loads of brightly coloured fish and some of the prettiest coral we have seen.

The following morning we left through a gap in the reef and had a beautiful fast sail for the 110 miles south to Carnarvon. Along the way we enjoyed seeing the capes and headlands in the lovely afternoon sunshine that we had missed seeing on the way north as we had sailed up in the dark. The Cape Cuvier salt loading dock is a particularly fascinating piece of industrial infrastructure, seemingly tacked on to a nook in the wild cliffs exposed to the vast Indian ocean.  Apparently, it is one of a handful of open ocean loading docks in the world that only a small number of certified ships can use, and requires specially trained tug and wharf crew.

We arrived in Carnarvon at about midnight, anchored in Teggs Channel  and were welcomed by cold temperatures and warm greetings from our Carnarvon Yacht Club friends.