Escape from the Gold Coast. 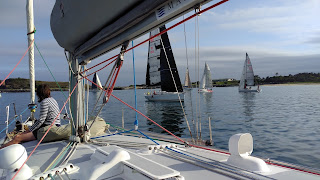 We are currently sitting in Coffs Harbour watching 13 yachts trying to race out of the harbour in very little wind. A great turnout for a twilight.

We arrived yesterday morning after a dream voyage of 24 hours from the Gold Coast seaway.
We were joined by Jenni's cousin Jaime on Monday evening and left the dock at a leisurely 9am on Tuesday.

We had a forecast window of about 30 hrs to get to somewhere down the coast. We thought we would be going to Yamba which is the entrance to the Clarence River and 100 miles south. As it turned out we had fantastic sailing conditions with the wind behind us and quite strong at times. This meant that we were passing Yamba at about midnight, a bit before our scheduled arrival time of 5am which was to enable us to enter in daylight and cross the sand bar at the best state of the tide.

We decided to push on another 60 miles to Coffs which was our original destination before we thought we only had a brief weather window. As it happened it was long enough and we took exactly 24 hrs to do the 160 miles, arriving half an hour before the wind started belting out of the south at 25kts.

It was the first time Jenni and Jaime had sailed through the night and it was perfect, a brilliant full moon, clear skies and brisk wind behind us, it was even warm. It was amazing to see the whole coastal landscape silhouetted in the moon light. We saw whales, dolphins and a turtle, Jenni steered us through a fishing fleet in the dark and we also sailed past Lisa Blair in Climate Action Now on her current challenge of sailing solo, non-stop around Australia.