Off to the big smoke.

After four days of almost continuous rain and wind in Manly marina we left yesterday for a great day of sailing and a journey up the Brisbane River.
The time in Manly was well spent despite the weather.
Jenni successfully completed her survival and safety course despite being a bit traumatised by the whole experience. We think it was worth doing and well put together, Jen learned heaps of new stuff and came away with lots of resources.
We did lots of little jobs including fitting some grab rails inside the boat [which is starting to take on the look of an old person's bathroom], fitting the gas switch so that we can switch off the gas from the cooker, installed the lee cloths so that we don't fall out of our bunks while sailing,  and we now have a salt water tap in the galley.
We also got our sails back from Ben at Quantum Sails and spent half a day on Monday wrestling the mainsail and its cover back into position.
We had our new Australian made anchor delivered and fitted by Brett who also sells the Ozifridge which is what we have in the boat so he was able to help us to understand the eutectic system a bit.
So by yesterday we were more than ready for a day of sailing and a bit of an adventure, including a Crew Overboard Drill - it's okay, no-one fell in, it was a planned exercise!
It turned out to be a sunny day with interesting variable winds and great scenery from mangrove fringed beaches to the giraffe looking cranes at the docks which can be seen for miles.
Motor sailing up the 12 miles of the Brisbane river was great fun, lots to look at, bridges and power lines to go under and we ended up in the middle of a big city!
We are now tied up to the pile moorings right alongside the Brisbane Botanic Gardens. 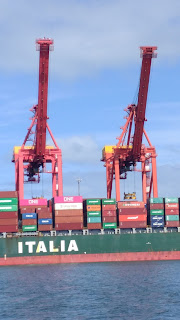 Giraffes working hard on the docks 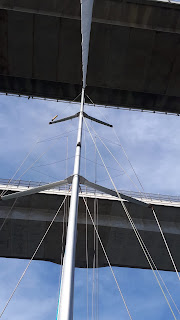 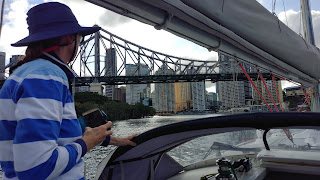 City views under the Storey Bridge 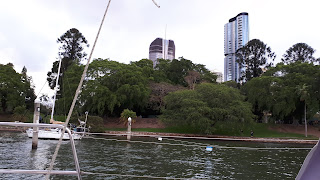 And we have arrived at the Brisbane Botanic Gardens moorings, right in the city centre.
at October 18, 2018