Four months after leaving Brisbane and the Gold Coast, on 20th February 2019 we made a joyous arrival in our home port of Albany. We have had the most amazing experience sailing over 3,200 nautical miles down the east and across the south coasts of Australia. 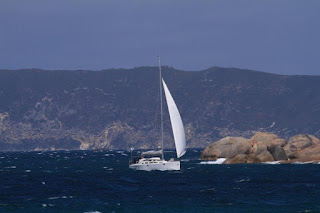 Although we have been ‘home’ for a few weeks ago now, and somewhat immersed in the busyness of land life it’s time to share the story and some of the thrills of the last leg from Esperance….

After Diana and Peter said a reluctant farewell, we chilled out for a week in the lovely friendly town of Esperance, as usual waiting for the weather to be right for the next leg.  We enjoyed the down-time and Esperance’s cafes, cinema, quirky museum, scenic walks and fabulously friendly yacht club.  I must mention the wonderfully helpful Mark Quinlivan again – the guy who lent us a car for our time there.  Diana and Peter spent a night in Mark’s Clearwater Motel and we highly recommend it if you are looking for accommodation in Esperance.

Our new crew Lloyd and young Christopher were on standby to get across from Albany and join us for the few days cruising home.  They came  on a Saturday and we again enjoyed watching the afternoon’s yacht racing from our premiere position anchored next to the start line, followed by a terrific dinner at the vibrant yacht club.

We were very taken with the whole Esperance sailing scene and the fantastic cruising in the Recherche Archipelago.  It’s definitely on the list to go back and spend more time there with the added attraction/incentive of the amazing places to see on the way.

We set off very early on Sunday morning for the Investigator Islands, between Esperance and Hopetoun.  These are two small rocky islands that are joined by a breaking barrier of low rocks to form a tiny horseshoe shaped bay.  Lloyd had been there in January, so with a bit of local knowledge we crept around the rocky entrance late in the afternoon into the tiny bay and dropped anchor in about 15 metres of crystal clear water.  Immediately we became aware that this little rocky outcrop was absolutely teeming with fish below and wildlife above – seals, sea lions and myriads of birds surrounded us. Unfortunately, due to the swell breaking over the rocky bar, a bit of surge in the bay and no beach to land on, we couldn’t go ashore and had to admire the local residents from the boat.

Despite being such a fascinating place, it wasn’t the most comfortable anchorage and a wind change in the wee hours of the night saw us up anchor at 4am and head off in the pitch dark to Doubtful Islands, just east of Bremer Bay.  We had a quiet day of light winds, enjoying spectacular views of the Barren Ranges in the Fitzgerald National Park changing shape as we made our way down the coast. We arrived at the beautiful Doubtful islands group mid-afternoon and stopped for a swim and snorkel in the sandy channel between two islands before heading into anchorage at Home Beach.  Here we could go ashore and stretch our legs.

The next day we were filled with excitement at the prospect of seeing the famous Orcas (killer whales) in the Bremer Canyon area.  We had been given co-ordinates and tips on where we might see them and set off at dawn for the 25 nautical miles out to the hotspot.  We were not disappointed!  After seeing several ‘blows’ and dorsal fins in the distance, then chatting to one of the tour boats on the radio a large Orca popped up  right next to the boat blasting out a tremendous out-breath!  That one was just teasing us and quickly disappeared.

We then sailed slowly towards one of the tour boats and by midday found ourselves right in the midst of a pod of about 6 orcas, lifting heads, flapping tails and fins and generally putting on a bit of a show.  Unlike other whales we have seen that are resting for long periods on the surface, the orcas are hunting at great depths and come up for air and a short rest.  The canyons are on the edge of the Continental Shelf where the depth drops rapidly from about 100 metres to several kilometres, creating an intense marine biodiversity hotspot for orcas and other giants of the sea.

We were too excited and didn't have the camera gear to take any decent pictures...

But there are  plenty of fantastic photos on the web so we'll borrow one for you:

Thrilled with our up-close experience and with a nice south-easterly breeze filling in, we popped the spinnaker and enjoyed a fast run all the way for the 60 odd nautical miles to Two People’s Bay.  The moon was rising beautifully as we sailed into our familiar bay at about 9pm and dropped anchor for the last time on this big voyage.

Next morning, we enjoyed a leisurely start knowing we had a mere 25 miles to go. We were delighted that Jenni’s long-time friend and childhood sailing buddy Marie could join us for the final cruise home.


The conditions were perfect to make a quick sail for the last 25 miles from Two People’s Bay, running across King George Sound in a fresh 20-25 knot easterly and taking a leg out past Breaksea Island.
We came flying through the channel under jib only and to our great surprise were greeted at the Town Marina by a wonderfully warm welcome party.  The champagne flowed!

Thank you so much to everyone who came down to cheer us in, for all your warm wishes and the great photos people took of us coming across the sound and through the channel.  We were thrilled  to have brought our lovely boat home.  We couldn’t be happier!

So what’s next?  Well we took a few days to move off the boat and enjoyed being ‘visiting yachties’ at the marina right in the middle of our home town.  After a few days at the marina, we moved the boat across the harbour to our new pen at Princess Royal Sailing Club and somewhat reluctantly moved back into the house.  Our very grateful thanks to Johnno Clarke for setting up mooring lines ready for us., and to Colin Westerberg and Kelly Walsh who put in the new pylon for our pen.  Upstart is snug and secure in her new home and we have again become familiar with living on-shore.

This year will see us here in Albany, enjoying local cruising for the remainder of the summer/autumn seasons and then pulling the boat out of the water in winter for maintenance.  Next year.... watch this space! 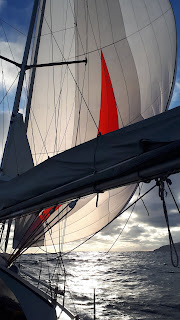