Reaching to the Recherche

As promised this comes to you from the lovely town of Esperance, W.A after our Great Australian Bight crossing.  We are relaxing in a café, waiting for our mammoth load of washing to go through and generally enjoying the joys of town life.

After waiting out the extreme heat wave in Streaky Bay (47 degrees!), our new crew Peter and Diana moved on board and we filled the boat with food, water and fuel and set sail. We wanted to give Peter and Diana a chance to sail the boat in the protected waters of Streaky Bay before heading out into the rigors of the Southern Ocean so we had a day sail and put a few sails up and down before anchoring at Eba Island, a few miles out in the bay.

Next day we set off for the beautiful St Francis Island which is about 50 miles west of Streaky Bay. The west coast of the Eyre Peninsular is peppered with islands and we were still regretting that we had missed out on a visit to Pearson Island so we were keen to go to St Francis. We anchored in a lovely north facing sandy bay with half a dozen other islands in sight to the north. Crystal clear water and those turquoise colours over white sand that hardly seem real were our world for two nights and days.

There was evidence of human occupation including a couple of stone building ruins which were being rapidly reclaimed by the land and sea. Who knows what people were doing there and why they took the trouble to build such houses. The only current residents were sooty shearwaters [Mutton Birds] whose burrows were everywhere, tiger snakes and wallabies.

We took a walk up to the top of the hill where there is a lighthouse and a radio repeater tower. The views were worth the effort of navigating through the scrub looking for stony ground the Shearwaters had not dug up.

When we got back to the beach in the afternoon there was a large pod of about 30 dolphins we had seen earlier still playing in the shallows along the shore. They were also having a Sunday at the beach it seemed, sparring and having fun while watching us by holding their heads above water for quite some time particularly when we were swimming. Wonderful!

We dragged ourselves away eventually for a lovely 6 hour sail to Ceduna. Most people we had spoken to had been disparaging about Ceduna but we found it to be friendly and pleasant in all respects and a good place to top up our supplies including an interesting experience taking on water at the big ship dock through a massive canvas fire hose. We also did a bit of business at the local Aboriginal Art Centre and came away with some lovely sea dragons for the saloon area of our boat.

We then set off for the local playground favourite of Davenport Creek. A totally sheltered inlet arm hidden behind the massive sand dunes. We motored in through unmarked shallows and massive rafts of ropy weed until we were forced to stop by the mass of weed on the prop. Peter was keen to jump in to clear it so we dropped anchor while he went for a swim to do the business.


We enjoyed another three nights there meeting up with dark clouds of very vigorous mosquitoes in the evenings. We could see why the few locals who turned up during the day left well before dusk!
Eventually it was time to get on with it and leave for the Bight crossing. As often happens we started off motoring for an hour or two waiting for the breeze to fill in but this time we were in a thick fog. By lunchtime we had the main down and were pushing along nicely with just the jib doing our normal 7 knots.

Although the wind was favourable as forecast and stayed constant at 20-25kts on the beam, the sea became really confused during the first evening and we suffered about 30 hours of being tossed around like some crazy cork in the most horrible sea state. Short steep waves were crashing into the side of the boat, throwing massive great buckets of water straight into the cockpit.  Mostly the crew dodged these but the odd one hit the target, testing our wet weather gear and good humour.

Mr Flottmann took the opportunity to have a good long spell in bed and fast during this period and the rest of us didn’t feel like eating much either. The second dawn at sea saw a great improvement in conditions as the wind moved more behind us, the waves settled down and everyone was feeling well and hungry again. The rest of the 3 and a half day sail was easy and fast and after 540 nautical miles from Ceduna we made it in to Middle Island well before dark on the fourth day.

Once again we found ourselves in a north facing, white sand bay surrounded by islands and ragged rocks. Stunningly beautiful. We visited the spectacular pink lake and spent hours wandering along the beach looking at all the things animal, mineral and vegetable in abundance there. We found highly polished areas of granite which looked wet until we touched them and found them dry and glossy, massive areas of quartz type rock, whale bones and minute finely detailed shells, sea eagles and those tiny birds that run along the sand at high speed like cartoon creatures [plovers].

Some of the treasures at Middle Island.... 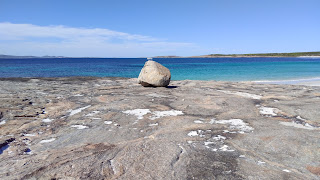 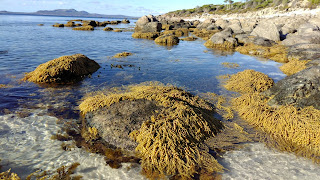 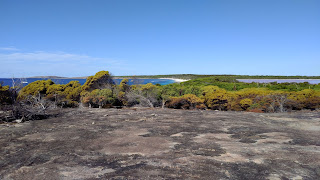 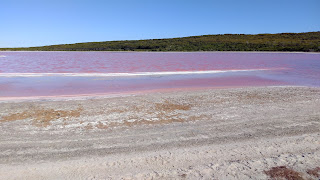 Our next stop was a natural tiny harbour facing south called Victor Harbour where we snuck in behind Lorraine Island with the keel up to anchor in a space just big enough for us to swing at anchor. We had intended to stay there for a couple of nights but the captain was up at 3am woken by a change of conditions as the swell increased. The crew were roused and we were out of there by 7am before the surf closed off our escape route.

The new day brought us another lovely gentle sail through the most dramatic seascape you can imagine. The Recherche Archipelago is over 100 miles long and Matthew Flinders described it as the most rock strewn dangerous area of sea he had ever seen. Of course we now have the benefit of satellite navigation and all the charts that have been developed from Flinders' original, amazing work.  Facing this area with none of these must have been hair-raising to say the least for Flinders and his crew.

After the parched and denuded landscape of much of South Australia, it was so wonderful to see the deep green of the healthy native bush on the islands and hilly shores of Cape Arid and Cape Le Grande national parks.

As we sailed the last few miles into Esperance we were welcomed by a pod of dolphins who stayed with us for more than half an hour amusing us with their antics at the bow.

As it was a Saturday the Esperance Bay Yacht Club racing fleets were out and we enjoyed a celebration bottle of bubbles as we watched the fleets finish their races. We were then treated to the most wonderful welcome by the members of the EBYC as each of the bigger boats came past us at anchor to offer us welcome before dinner at the clubhouse.

The friendliness, kindness and hospitality of club members has been amazing.  A massive thanks to Mark Quinlivan from Clearwater Motel who has leant us a vehicle for our time here. If you need accommodation in Esperance, please have a look at Mark’s place, its perfect and he is such a great host.

We said a fond farewell to Diana and Peter last night who are reluctantly returning to their everyday lives. We will now spend the next week or so here in Esperance, enjoying it all and waiting for the next high to settle in for our final cruise home.