It feels like we have been on a long journey this last 12 months, one of preparation and packing. Upgrading the boat from one which was set up for short cruises in Queensland to one fit for the open ocean has been a big job for us. Preparing Jenni’s house to be left and rented has also been a large task involving sorting and moving her belongings. A lot of things to let go! Cars and boats needed to be sold and in the case of ‘Cloud’ put into storage. Chris needed to finish moving out of the workshop on the farm and finalise arrangements with his partners in that venture. We are both very fortunate to have lovely tenants for our homes.

We are on the move again, yea!
Finally on Thursday 5th March we left our pen at the sailing club and headed over to Oyster Harbour for a quiet couple of nights on one of the courtesy moorings there. When we arrived all the moorings were taken by a small fleet of local boats waiting for a change in the weather so that they could leave for Esperance so we dropped our anchor nearby.

Anchor dragging.
We woke the next morning to an even stronger easterly with quite a bit of north in it and sure enough after a couple of hours Chris decided to let out a bit more chain and as he did so the anchor started to drag and we were headed for the beach very close by. Fortunately the motor was running as a precaution and we were able to motor forward just before we connected with the lovely old vessel ‘Amity’ which was moored next to us.
We then headed out of the harbour and dropped anchor at the pretty little Middleton Bay just outside the Emu Point channel where the wind was safely blowing offshore. The sun came out and we spent a great few hours swimming and resting before heading back into Princess Royal Harbour for a more sheltered night in town. Lloyd joined us in the evening and we set off before dawn the next day, Saturday the 7th March to head west to Cape Leeuwin and the Indian Ocean.

The easterly was still pretty brisk so we motor-sailed against the wind with plenty of water over the bow out to Bald Head as the sun came up. Once we turned the corner and started heading west and down-wind the motion was easier and Chris went below to make tea.


Leaking boat.
Sadly he was greeted with the sight of a soaking wet bed and forward cabin, salt water everywhere. It turned out that the big hatch over the bed has a setting which just leaves it open a small gap for ventilation and this had been accidentally used instead of the fully closed position, oops! (Won't make that mistake again!)

The rest of our 30 hour journey to Hamelin Bay was easy and uneventful. We had good winds from behind for most of the way with only a couple of hours of no wind when we motored to keep to our scheduled arrival time. The night watches enjoyed beautiful clear starry skies and an almost full moon. It was lovely to have Lloyd along again to share the first leg of this new voyage.

As we rounded Cape Leeuwin in the early morning, we reflected on having now sailed the entire south coast of mainland Australia.

Hamelin Bay just north of Cape Leeuwin was as beautiful as ever. Strong easterly winds persisted for the whole week we were there but the anchorage was comfortable and snug. The caravan park was very helpful and we made full use of the laundry for washing and drying the salty stuff from the for’d cabin. We were invited by an old client of Chris’s who is a fisherman there to use the new mooring they had installed for visiting boats.
The following morning we woke to the sound of a large diesel motor close by and 2 crayfish were dropped in our dinghy. Chris went to say thanks and went aboard the fishing boat to meet the crew including Girl [aging blue heeler] and have a look around. He thought he had made friends with the dog and was surprised to get nipped on the hand as he went to pat her goodbye. Quickly pulling his hand away meant that a sharp tooth tore the soft inside of his hand just near the thumb. It was a neat deep tear and really should have been stitched but Mr Lee was resistant to that and stuck it together himself. It is healing nicely but of course taking much longer than if it had been sutured, and unfortunately keeping it dry meant no swimming in Hamelin Bay for Chris.

While on the topic of hand injuries, the next day we had an after-school visit from Oli and her three kids for a BBQ dinner and a bit of fishing. Chris was sitting on the beach with the boys when the dinghy started to drift away, he put his good hand down on the sand to get up and put it right on top of a resting bee. Never having had a bad reaction to bee stings before, he didn’t think much of it and the evening progressed for about an hour during which time he became very itchy. Turns out he had developed a bright red rash of hives across his groin and thighs, under arms and head. Jenni rushed back to Upstart for anti-histamines and after another hour it had subsided just leaving a very swollen hand which persisted for 3 days. All in all a bad period for hand injuries that left us singing that song from the Sound of Music...   when the dog bites, when the bee stings….🎵🎵

During the week we were a bit surprised to see a sail approaching from the south. It was Darren and Linda on ‘Baudin’ the leading boat in a fleet of 6 from Albany. They had got fed up with waiting for the easterly to subside for their planned trip to Esperance and hopped on the wind going west instead. During the course of the day five boats arrived and one continued to Quindalup.

Dunsborough
It was great to have a few mates around and we joined them sailing north to Dunsborough Bay on the 14thMarch. We had Chris’s mate Alex and his two nieces Nava and Avaz on board for the day sail along the coast of the peninsular and around Cape Naturaliste. A lovely sail and a good chance to catch up with an old friend.
We have been here on a mooring in Quindalup for a few days now and will stay for a week or so, or until the wind is making it unsafe.

Oli, the kids and her friend Fay joined us again earlier this week for twilight sailing and fishing. Young Isaac proved his mettle as an apprentice rigger, climbing the mast to the top spreader to retrieve a wayward halyard.  (Although he quite effortlessly free climbed the mast, we did of course have a safety harness on him!).  It was a beautiful evening and the kids had a great time exploring, hauling in the sheets, grinding the winches and learning to steer the big boat.

We are enjoying the relative quiet here and have been provisioning and catching up with a few small jobs. Heavy rain a few days ago washed all the salt off the boat and enabled us to fill our water tanks.  We are very well placed for self-quarantining.

Most of the other Albany boats have gone further north now looking for a bit more warmth, We may see them going the other way when they head for home and we make our way north at some time.

Exploring Hamelin Island - in pictures.
Hamelin Bay was a bustling timber port in the late 1800s early 1900s with the remains of a long timber jetty still visible in the water. We took a dinghy ride across to the little island off the Bay to explore the old ship moving infrastructure still there. 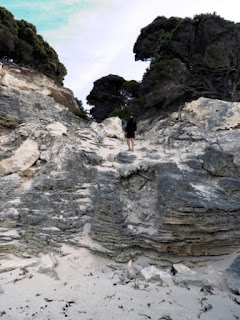 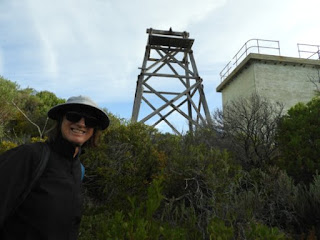 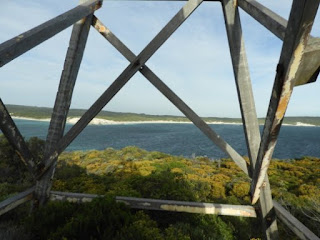 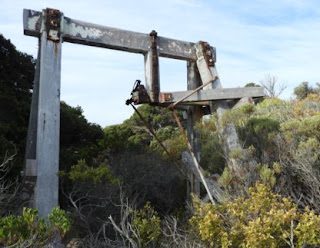 at the bottom of the page to "View Web Version".
https://www.jenniandchrissailingadventure.com/