Waiting to take the Bight

First of all, here are the promised photos of the wonderful sculpture of Matthew Flinders and Trim in Port Lincoln. We know you have been waiting for them!

We are writing today from the lovely  but very hot and dry Streaky Bay. S.A. on a 40+ degree day -with cyclones and deep low pressure systems to the north and south of us across the whole country, and way to the south. [Crazy weather patterns and we are expecting 45 degrees tomorrow!]

We are waiting for the weather to settle a bit so that we can set out across the Great Australian Bight and hoping for one of those persistent high-pressure systems that park south of the Bight and provide easterly winds all along the coast. 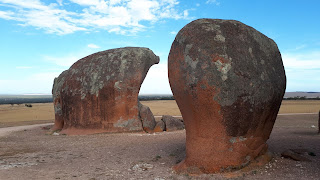 The day before we left the Port Lincoln area we had a lovely little sail in the sheltered waters of the bay from our town anchorage back to the National Park to the south and anchored in Spalding Bay for the night ready for a pre-dawn departure towards Coffin Bay.

As we left in the dark a nice south easterly wind was blowing for us which enabled us to thread our way through the notorious Thorny Passage at the south eastern end of the Eyre Peninsular, without tacking and with a good strong tide flowing with us. This was the stretch of water where a small boat and 8 crew were lost from Flinders ship Investigator and so all of the islands in the passage are named for the sailors who drowned. Fortunately it was not so rough for us to start with and we shot out of there doing 9 knots over the ground until we hit the swell out in the ocean where the sea got very rough and confused indeed. We had planned to sail around Williams Island which is off Cape Catastrophe and West Cape at the southern tip of the peninsular but given the crazy sea state we turned right and took the inside passage where things were a lot more comfortable
.
The only place available for having a rest on this passage was quite close to our destination and a fair way off our track. It also had the ominous name of Avoid Bay [the names around here are dire!]. So, as we were making really good time in a nice south easterly breeze we decided to keep going for Point Sir Isaacs which is at the entrance to the huge Coffin Bay. We arrived there at 5.30pm covering the 92 miles in about 12 hours. We spent a comfortable night there all alone and feeling like we were in the middle of nowhere.

We had made arrangements with the Coffin Bay Sailing Club to use a mooring or their jetty for a few days and so we set off the next morning motoring in no wind to cover the 22 miles through the shoals, sand banks and oyster farms to the little one shop town. A really fine sunny, gentle day of moving through the rugged parched scenery of South Australia.

Coffin Bay town and sailing club were a real treat. We arrived on a Friday which was the day the club had a little evening market on the grassy banks of the inlet, some music and a simple dinner for anyone. Turned out the place was heaving with hundreds of diners and drinkers going for it all evening. All run by volunteers from the little town of 160 people.


We enjoyed 3 nights there and on the morning we left took the boat in to the Fishing Boat wharf to get some water where we met a few locals and got some great advice for anchorages from the fisherman whose mooring we had been using.  We also bought a hot water tank from Shane who runs the slipway. Standard payment for all these things was a carton of beer. We left later in the morning to return to our little spot at Point Sir Isaacs and prepare to go to sea again the following morning.

We were excited to be heading out to the uninhabited Pearson Island on our way north. We had heard that it is very pretty and has colonies of rare Wallabies and Seals. We had pruned our planned stay back from two nights to one because of a forecast north east wind and then had to abandon the whole trip because the temperature warning light was on for the motor. It turned out to just be a faulty sender but at the time we didn’t know and thought it best to head north to a lonely spot called Waldergrave Island which is connected to the mainland by a reef. We had a good night there until the wind swung north east well before predicted and we had another early morning start as the anchorage was exposed to the new wind.

Our next leg was interesting, we were heading for Sceale Bay which is only about 30 miles south of Streaky Bay and the wind from over the land got stronger and hotter as we went along, at times like standing in front of a big hair dryer. We had some very strong gusts and were going along with just the jib up. Then it all stopped before coming in at a similar gusty strength from the complete opposite direction a few minutes later. This was Anxious Bay at its best.

We turned the corner into Sceale Bay at lunchtime in our usual fashion with a roaring gale blowing and a steep 2.5 metre swell crashing on the rocks straggling out off the point for a mile or two. We found a good spot in the corner of the bay with good protection and nice deep sand for our anchor.
We also saw lots of curious clear jelly blobs on the beach which turned out to be sea-snail egg sacs.

By this time our Bight crossing crew had arrived in Streaky Bay. Diana and Peter were in the caravan park and although only 30ks by road we had to wait for three days for conditions to be right for our sail north. In the end Diana came with us and we had a great trip with following wind and seas.  It took us six hours to cover the 37 miles to the safe mooring in Streaky Bay, which belongs to a very friendly commercial operator originally from Peaceful Bay just up the road from us in Albany!

With every bit of awning and shade cloth we could find covering the boat today, we are trying to stay cool in this heatwave. At the moment there is absolutely no wind at all, but we are expecting hot and gusty northerlies later today and tomorrow, then no doubt the ‘pirouettes’ of wind from every direction as the cool change comes through on Friday. 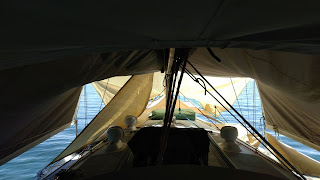 With no clear indication of when a suitable 3 or 4 day high might settle in the Bight, we plan to move up the coast a little further for a change of scenery later this week while we wait for that elusive high to take us over the Bight to the Recherche Archipelago, about 100 nautical miles east of Esperance.

The Bight crossing will take us around 4 days in good conditions, during which we will be pretty well out of range and ‘off the air’. We should have radio contact from time-to-time with the local sea rescue groups as we sail across.

Next update from Esperance!